With Photon 3.0 the exception handling went through a complete redesign. In previous versions the strategy was to catch all exceptions inside the Photon Framework (photonsocketserver.dll) and log them through a logging facade. This design had several drawbacks:

There are a couple of cases where the exception handling policy might be overridden by the CLR e.g. ThreadAbortException won't necessarily restart or end the process - see Exceptions in Managed Threads, the StackOverflowException can't be ignored - see StackOverflowException Class. For best practices on exception throwing and handling developers please refer to the following page Exception Handling Best Practices in .NET

Suggestions For The Usage Of The UnhandledExceptionPolicies

Microsoft introduced the "Terminate Process" as new default policy with .Net 2.0 with following statement quoted from Exceptions in Managed Threads:

When threads are allowed to fail silently, without terminating the application, serious programming problems can go undetected. This is a particular problem for services and other applications which run for extended periods. As threads fail, program state gradually becomes corrupted. Application performance may degrade, or the application might hang.

Allowing unhandled exceptions in threads to proceed naturally, until the operating system terminates the program, exposes such problems during development and testing. Error reports on program terminations support debugging.

But depending on the stage or situation your project is (in development, in QA, LIVE without known issues, etc.) you might consider using one of the different policies supported by Photon:

While developing setting "Terminate Process" launches the debugger/visual studio on process termination. Are you handling with a multithreaded issue you might prefer to keep the process running and the application loaded then setting the policy "Ignore" would be what you prefer.

During a QA Phase, either during the run of stress tests or manual testing, using "Terminate Process" ensures you won't get flooded by errors that stem from the root-error.

Live Stable - assuming your service is stable a policy you can consider using is the "Restart Application". In the rare event of an unhandled exception the application would be restarted by Photon minimizing the risks - this is the fastest way for the system to be up again. Faster than setup Photon as a Service with "Terminate Process" as policy and the auto-restart windows services feature. Note: you should monitor your service and log files in case this happens more often.

Live with a known issue - if the system shows an unexpected exception quite often and you need time to fix - depending on the exception it might be possible to keep a reasonably stable system by setting the policy to "Ignore".

Note on Debugging Core: For the rare cases where the Photon core raises an unexpected exception we recommend setting "ProduceDump" is always set for details see Photon Core Debugging" - sending us the generated dump files and logs will help us to fix the issue.

As depicted in the figure below an unhandled exception event is raised first in the context of the custom application (1) where the developer can log the exception in any way he requires to c) - please also refer to sample code Lite, Lite Lobby, etc. In a second step the CLR then raises the event in the default application domain (2) - which in the case of Photon is the PhotonHostRuntime. Because of this Photon is able to log the exception in b). 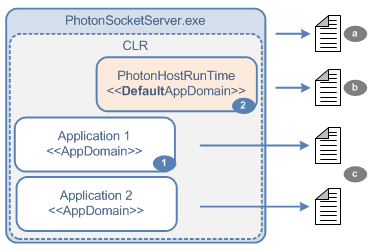 ProduceDumps can be: TRUE or FALSE DumpType: Full, Maxi or Mini