At first, your application needs to track the desired values. We are going to use the in-memory counters from ExitGames.Diagnostics.Counter for this purpose.

Make sure that your application has a reference to the ExitGamesLibs.dll from the /lib folder: 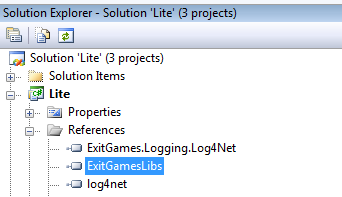 The next step is to create a counter definition class. Add "using"-directives for ExitGames.Diagnostics.Counter and ExitGames.Diagnostics.Monitoring and declare your custom counter like shown below. Add a "PublishCounter" attribute with a unique name; this makes sure that the counter value will be published by the the counter publisher (see below).

See the appendix for a list of available counter types.

In the appropriate place in your code, increment or decrement the counter. For example, to count the number of sent messages per second, add the following code to the method that handles your "SendMessage" operation:

That's all - you have done everything that is required to collect your performance data now .

The next step is to publish the collected performance data to the Photon Dashboard.

For this, you need to initialize a CounterPublisher during the start-up of our application. The Setup method of your application is a good place for this.

This example shows how to initialize the counter publisher and add your custom counter definition class. You can choose an arbitrary name for the second parameter - it's used as the category in which the counter will be displayed by the dashboard later.

The last step is to add the appropriate configuration for the counter publisher. Configure it to send data to the IP / Port where your Photon Dashboard is running. Remember, that multicasting is only working in the same subnet; to publish performance data between different networks, use the concrete IP and make sure that the port is opened up in the firewall.

In the previous steps we have made sure that our application tracks and publishes the required performance data. Now we need to make sure that the Photon Dashboard, which receives the published data, can display the counter values.

To extend the Photon Dashboard with your custom counters, it's helpful to understand roughly how the dashboard is working internally. The following schema should give you a good idea.

A counter receiver is listening on the specified UDP port for the counter data published by Photon. It stores the received values in RRD ("round robin database") files. These are files of a fixed size (ie., after they are initially created, they are not growing - no matter how long the dashboard is running or how much data it receives) and store values for a fixed period of a time - after that, the oldest entries are overwritten.

At certain intervals, the dashboard renders image files from the RRD files. A configuration file called Graphs.xml specifies how these images should look like. We'll discuss the configuration options further in the next section.

The Photon Dashboard contains an internal HTTP server, so you can easily access and browse the performance counter graphs on a web site, which can also be customized to your needs.

See the Photon Dashboard tutorial to learn how to configure the Counter Receiver, e.g. the ports / IPs it is listening to.

For each graph that we want to create from our custom counters, we need to add an item to the Graphs.xml config file. You can find that file in /bin_tools/dashboard.

The items in the Graphs.xml file look like this:

In most cases, you only need to adjust the image filename, the datasource (RRD) file name, and the title.

However, here is an explanation of all available attributes, in case you want to create some more advanced graphs:

Each graph can show values from one or many data source items. These are the available attributes for the elements in the "Items" section:

For a better understanding how graphs are created from RRD data sources, see https://oss.oetiker.ch/rrdtool/tut/rrd-beginners.en.html.

Information on the configuration options for the HTTP server - e.g., on which port and IP it should run - can be found in the Photon Dashboard tutorial.

If you want to customize the look of the dashboard web UI, you can make changes to the html file or the .css stylesheets in /deploy/bin_tools/dashboard/web.

This section discusses the available types of in-memory counters from the ExitGames.Diagnostics.Counter namespace in greater detail.

All counters implement the ICounter interface:

As you see, there are mainly methods to increment / decrement the counter value.

GetNextValue is the method to return the actual "value" of the counter. This can be a calculated value - for example, when you call GetNextValue on an AverageCounter, the counter calculates the average of all increments / decrements since the previous call to GetNextValue and returns that value. GetNextValue resets internal values - you should never call it in your code manually, otherwise the published data will be incorrect. The CounterPublisher makes calls to GetNextValue at regular intervals.

This is a very straight-forward counter. It holds a single value; GetNextValue returns that single value and does not reset the counter.

Example: At the start of a 10-second-interval, the NumericCounter has a value of 5. It is incremented 2 times, with values of 1 and 6, and decremented once with a value of 3, resulting in a value of 5+1+6-3 = 9 for this interval.

Typical use-case: The number of users that are currently logged on to your system.

The AverageCounter tracks how often it was called since the last reset, and can be incremented by any value. It returns the average amount per call in the current interval (= total amount / # of calls).

Typical use-case: The average execution time of a certain operation, or the average text length per sent message.

The CountsPerSecondCounter holds a single value, which can be incremented / decremented by any value. It returns the average amount per second in the last interval. You only need to increment / decrement the counter, it converts these calls in "per second" values automatically.

Example: In a 10-second-interval, the CountsPerSecondCounter is incremented 3 times, with values of 10, 20, and 70. This is 100 in total, resulting in a value of 10 per second for this interval.

Typical use-case: The number of sent bytes per second on a network interface, or the number of times a specific action is taken per second.

The purpose of the PerformanceCounterReader is to read values from underlying Windows performance counters. It is a read-only counter and can not be incremented / decremented. This is failsafe, i.e. no errors are thrown if the performance counter does not exist or access is not allowed.

The WindowsPerformanceCounter is a wrapper class for Windows performance counters; it provides read / write access to the underlying counter. The performance counter need to exist and the reading / writing application needs to have the appropriate rights, otherwise an exception is raised.

For more information on Windows performance counters, the MSDN is a good starting point: https://msdn.microsoft.com/en-us/library/system.diagnostics.performancecounter.aspx